When we laid the Stolpersteine for the two-year-old Jutti Ziering and her mother Zilla, née Spatz, in 2014, we already noticed that there were other relatives of the family. But on the one hand at first our focus was on the children and on the other hand we still believed at that time that Stolpersteine are not laid for survivors.

Last year, when surviving members of the Ziering family approached us and wanted to know if we could lay Stolpersteine for other family members as well, we started to look into the family members who had been overlooked so far.

So it comes about that now we lay 8 more Stolpersteine, in three places:

at Schillerstraße 7 for Leo, the father of little Jutti,

and here at Pferdemarkt for Leo's brothers Isaak and Benjamin, Isaak's wife Cilly and their sons Heinz Hermann and Siegfried.

The Zierings are from Kalusz (German: Kalusch), a Ukrainian town at the foot of the Carpathian Mountains. Kalusz belonged to Austria-Hungary before World War I, was destroyed and fell to Poland after the Soviet-Polish War (1921-23).

Tzvi Khaim Ziering and Rivka Nussbaum had 4 sons and a daughter, all of whom were born and raised in Kalusz; Joseph (born April 1, 1888), Isaac (born November 23, 1895), Leo Leib (born December 3, 1900), Benjamin Benno (born March 10, 1903) and Anna Channa (born April 20, 1907). When Kalusz fell to Poland after the war, all five siblings emigrated to Germany. While Joseph went to Hanover, the four much younger siblings met in Kassel. The parents stayed behind. Only after the death of the father in 1929 the mother did move to Kassel to join her children.

Isaak was born in 1895 and was 25 years old at the time. Even before the war, Isaak Ziering had attended school, graduated with the „middle school“ (after 10 school years) and completed a commercial apprenticeship. During the First World War he served in an Austrian Ulan Regiment and fought on the Romanian and Italian borders.

In 1920 Isaak was registered in Kassel for the first time,he  moved to Göttingen in 1822 and on to Dortmund. There he met Cilly Frisch, who came from Rosniatow in Galicia (born  July 7, 1901) and ran a shoe store in Waltrop.  In 1926 they returned to Kassel and married on Christmas Eve of that year. Isaak initially works as a "traveler" and deal with textiles. At the end of the twenties, his brothers Leo and Benno came to Kassel and he ran a retail business together with them. At first he sold paintings and prints, later on with the brothers mainly textiles. For the longest time their business and also their joint residence was in the house Pferdemarkt 28 (1932 - 1936). With Benno, Isaak lived previously at Entengasse and after 1936 at Tränkepforte ½. Isaak and Cilly had two sons: Heinz Hermann (born December 11,1926) and Siegfried (born March 20, 1928). Isaak had a good reputation, worked for the common welfare, was a board member of the Jewish Community and the Jewish School, and held other honorary posts, too. In Association of Eastern Polish Jews ("Minjans" / Ajudas Achim") he had the chairmanship. He employed a house maid and their sons attended the Jewish school at Rosenstraße.

During the November pogroms in 1938 (in Kassel already two days earlier on the 7th: than in the other cities of the German Reich) also Isaak's textile store (at that time at Graben 68) was "smashed and looted by the crowd".

But that was only the beginning. Four weeks later, on December 4, Isaak was forced by the police to send his valid passport to the Polish Consulate in Frankfurt, allegedly for a necessary stamp. Then, in early May 1939, he was threatened to be expelled and deported if he could not produce a valid passport. Even when he went in person to the Polish Consulate General in Frankfurt, he did not get his passport back, but was put off with appeasing words.

On May 22, 1939, Isaak was arrested and taken to the Polish border with 22 other Polish Jews. What happens to them strongly reminds oft he so-called „Polen-Aktion“ * in October 1938:

The Polish authorities were not informed and reacted differently.

There is a written report by Isaak Ziering which shows that the people concerned were simply abandoned, without papers and without any information (with food for two days) and left by themselves. In some cases they were imprisoned for lack of papers (the IDs they had had been invalidated by the German authorities). Benjamin, for example, spent three weeks in prison in Oels (in Lower Silesia).

Isaak relates that he lived in no man's land for several weeks and before he could escape from Berlin to England together with his brother Benjamin. Once in England, he fell ill with jaundice and had to be hospitalized for six months. After his release, he worked as a book keeper for several years. 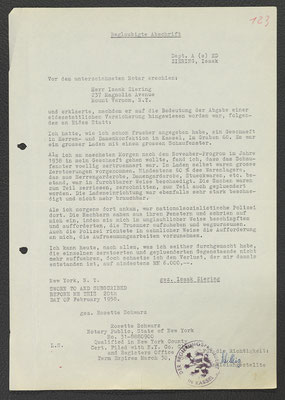 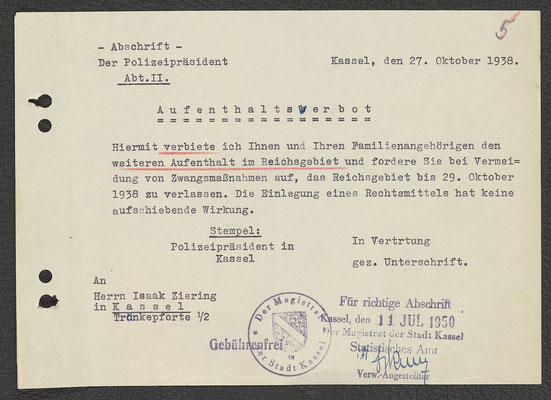 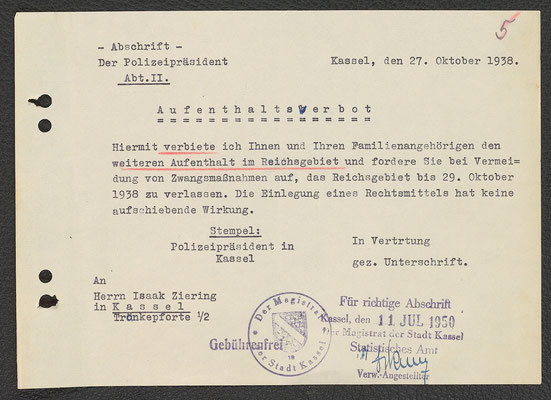 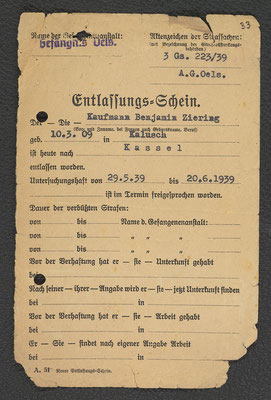 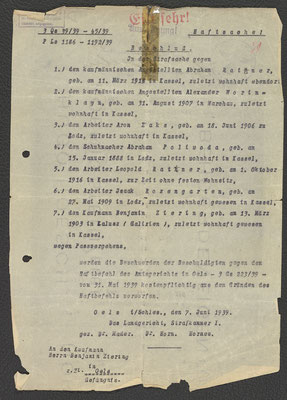 Isaak's wife Cilly had to stay behind in Kassel in 1939 together with their eleven and twelve year old sons Heinz Hermann and Siegfried. She worked in a cardboard factory and received support from a welfare organization. When the systematic expulsion of the Jewish population began in 1941, the members of the Ziering family still in Kassel were affected. On December 9, 1941, two days before Heinz Hermann's 15th birthday, they were deported from the Kassel main train station to the Riga Ghetto together with more than a thousand other fellow citizens. The younger brother Siggi was just 13 years old.

Four long years lay ahead of them, which they had to spend in various camps with hard forced labor, with poor nutrition and partly under severe mistreatment.

Nevertheless, they were able to get through the years until the end of the war. Certainly, the family cohesion contributed significantly to this. Until 1943, the brothers were still in contact with their sister-in-law Zilla and her little daughter Jutti, who could not survive (and for whom there are Stolpersteine, at Schillerstraße 7 since 5 years).

In 1943, Cilly and her two sons were sent to the Kaiserwald concentration camp, which was not an extermination camp like Treblinka or Auschwitz. Here, the inmates had to perform forced la bor for large German companies, such as AEG. Eating water soup only, Cilly had to load and unload ships in all weathers. In the process, a serious, almost deadly "accident" occurred.

While hanging from a rope ladder, Cilly was hit so hard by a supervisor that she fell down several meters. Broken ribs, bruises, a deep head wound and knocked-out teeth were the effect. There was no medical care. While she was unable to work for 12 weeks, her campmates managed to keep her hidden, to care for her and provide her with food.

At the end of WW II the Zierings had luck at several times. They were in Libau** / Liepaja on the Latvian coast The army units fled or were evacuated prior to the invading Soviets and probably took some of the prisoners with them. Thus, in February 1945, they came to the Hamburg-Fuhlsbüttel-prison, from where, on April 11, they were forced to a 100 km  walk to a labor camp in Kiel, which Cilly survived despite of her injuries.

Siegfried described in his letter that they were lucky in Fuhlsbüttel because prisoners were selected according to the alphabet to go to Bergen Belsen (Z is at the very last in the alphabet). Kiel-Russee was the next station. There was the labor education camp NORDMARK***.

The Swedish Red Cross (rescue operation White Busses****) freed them on May 2, 1945 and brought them to Stockholm, where they remained until 1946.

Isaak Ziering, who had been able to leave Germany in 1939 and worked as an accountant, had his wife and two sons join him in England in 1946. Together they emigrated to the USA in 1949.

Benjamin Benno Ziering was born in Kalusz on March 10, 1903. After attending elementary school he completed an apprenticeship as a tailor. In the twenties he came to Kassel with his siblings. In 1927 he was registered at Graben 57 and ran a sculpture business there. Later he dealt with pictures and had a store at Mittelgasse 33 (1930), Entengasse 29 (1931), Untere Königsstraße 66 (1932) and Pferdemarkt 28 (1933-36). Elsewhere, it is said that he ran a thriving "retail store for cut goods and bed linen", with travelers working on commission, later: textile goods retail store with one employee.                                     In 1938 he was expelled to Poland, but was sent back from there. Finally, on August 28, 1939, Benjamin managed to escape to England. Actually, he wanted to go directly to the USA, but he had to wait in England because he did not receive quickly enough the Polish quota number, and so he was able to continue his journey only in 1950.

All of the Zierings for whom we are laying Stolpersteine here had survived the terror of the Nazi regime. However, the horrible mistreatment and humiliation resulted in severe suffering, both physically and mentally. Nevertheless, some of them reached a very old age, Cilly even was 100 years old.

Isaac Ziering died on April 21, 1958 in the age of 63 in New York and was buried in NY. His body was exhumed and he is currently buried in Jerusalem.

Benjamin died on October 1, 1966 (63). Benjamin and his wife Melanie both were buried in N.Y.- they too are in Jerusalem now

Debby Ziering, she is married to Steven Markowitz

* „Polenaktion“   At the end of October 1938, on Heinrich Himmler's orders, 17,000 citizens of Polish origin were arrested, initially held in prison and collective camps, and then deported across the border (at Zbąszyń (Bentschen), Chojnice (Konitz) in Pomerania, and Bytom in Upper Silesia) in guarded special trains.

** Liepāja massacres refer to a series of mass killings by the German Wehrmacht, the Einsatzkommandos of the SS/police, and the Latvian Selbstschutz (auxiliary force of the occupying power) during World War II near and in the Latvian city of Liepāja (German name: Libau). Most of the approximately 7000 resident Latvian Jews were shot in the process.[1] Only about 800 surviving Jews were held in a cordoned-off area to perform forced labor in 1942 and 1943. The Zierings were "lucky."

**** White busses, vehicles painted white and marked with Red Cross signs under the Swedish flag, were used to transport some 15,000 mostly Norwegian and Danish prisoners from German concentration camps to safety in Scandinavia starting in March 1945. The Vice President of the Swedish Red Cross, Folke Bernadotte, had personally arranged these humanitarian rescue operations with Walter Schellenberg and Heinrich Himmler starting in March 1945.